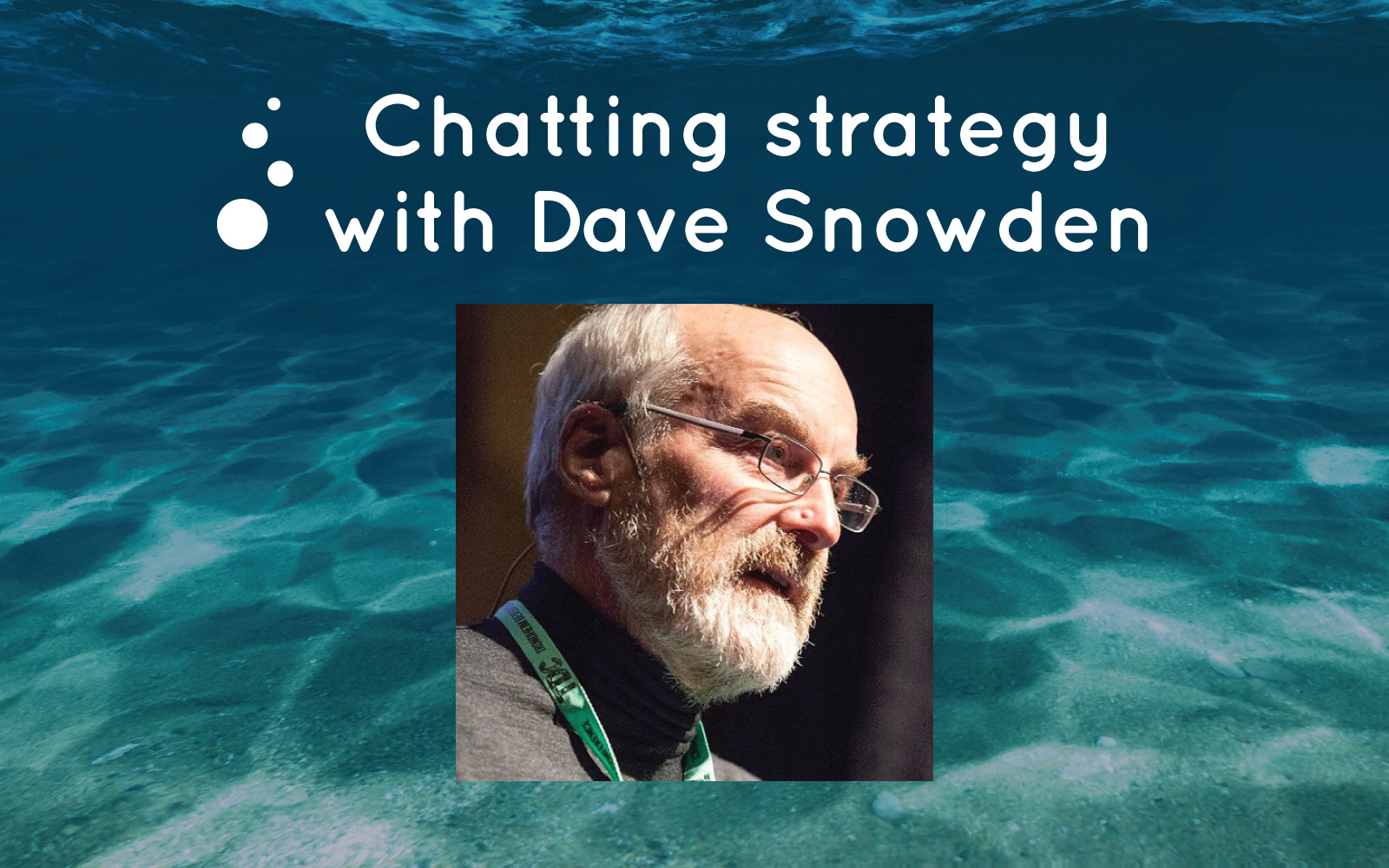 Ahead of his visit to The Deep Dive this March, AgileTODAY caught up with Dave Snowden to discuss Cynefin, the state of contemporary strategy, trekking, and more.

Dave, we can’t wait to welcome you Down Under for The Deep Dive, where you and Simon Wardley will explore how organisations can anticipate and exploit uncertainty. This won’t be the first time you and Simon have worked together—in what ways do your approaches complement each other?

Well, we are both proud of being cynics and curmudgeons 🙂 Remember, it’s the cynics who care, it’s why they stand out.

Both Simon and I want to enable people to understand where they are and where they are going without the need for heavy consultancy and highly constrained methods. We both dislike the fad cycle which has dominated management for the last few decades.

In terms of approaches, Cynefin provides a sense-making framework to talk about the type of decisions you make. It provides a method to determine the context in which you would ‘map’, and then assists in deciding where you move on a map. In Cynefin, Apex Predator theory is the closest direct parallel to Wardley Maps. Also, our real-time engagement of cognitively diverse resources provides a new tool for mappers and a means of reducing risk. There are many more parallels between our approaches, and more we’re still exploring. The Deep Dive will be a part of this exploration.

Your Cynefin Framework has been applied within a wide range of contexts—assisting with U.S. counterterrorism efforts, helping combat HIV/AIDS in South Africa, and guiding contemporary organisational strategy. You developed Cynefin back in 1999 at IBM; where has it been applied that you’re most proud of?

It’s the breadth of use that I’m proud of and the way people have used it to make sense of their world just by reading the material. One of the strengths of Cynefin is that it wasn’t just a one-time creation. Instead, it’s been an evolution of theory with practice over the years. The latest version is the liminal version, which is probably near-final as it resolves the question of disorder and transition.

The other thing is that as you use Cynefin more, you find more depth. Right at the bottom, there are specific frameworks for each domain which also stand in their own right. You can use these frameworks to create a common language between strategy and operations. Cynefin is also used a lot in conflict resolution. When a situation is complex, the only test for an idea is coherence – not whether it is ‘right’ or ‘wrong’ – so Cynefin allows people to make progress without needless and dangerous homogenisation. There is no need to paste over differences if you understand that what is ‘right’ or ‘wrong’ will emerge in time, it is not pre-given.

With 2019 marking the ten years since the GFC, I’m curious as to how you think corporate governance and strategy has changed in its aftermath.

That is a massive question. Governance we thought had improved, but then we get events like Trump and an abandonment of the norm, so the question is open at the moment. One of the factors leading to the GFC was an unbuffered feedback loop in trading systems. Buffers were put in for that; but we didn’t learn the lesson for the wider internet. Social media is now a threat not an opportunity. It lacks any inhibition, so perversion arises fast. We didn’t learn the lessons there.

Overall, the real issue is the use of a means of exchange to govern value transactions—and the blockchain doesn’t change that. Until we understand constraints (as in Doughnut Economics) and gifting (which is not a reciprocal transaction), we will continue to have models based on perpetual growth. As these models are inauthentic to the nature of reality, there will be more destructive cycles (obvious order to chaos in complexity terms) and governance is only a bandaid.

How does Cynefin interact with Agile, and are there any conflicts between the approaches? How could an Agile organisation benefit from structuring itself around the Cynefin Framework?

Cynefin allows a multi-method approach to select between different methods and tools. Scrum is very effective in the liminal domain between complex and complicated in Cynefin. In pure complexity, however, we need pre-Scrum techniques (and we have developed several, including unarticulated need management, forced mutation and trios), as well as a post-Scrum use of waterfall, timeboxes etc. The massive bureaucracy of things like SAFe represents the antithesis of Agile as it seeks Borg-like homogenisation. Cynefin is a light structure that allows you to determine when and where you use different methods and acquire new ones. SAFe is like a throwback to the ERP systems of a decade or so ago, which now provide issues with rapid updating to accommodate new circumstances. It’s an old model for a new age…

We are now starting to talk about moving from ‘being Agile’ to ‘gaining Agility’. Cynefin is important here, as it can link the various functions of an organisation in a non-linear way.

In your writings, you’ve emphasised the need to avoid homogeneity of thought when creating strategy. I agree with you that the views of people with “access to the knowledge assets of the organisation” – like “sidelined middle managers, secretaries and administrators” – shouldn’t be overlooked. How can leaders include these voices in discussions surrounding strategy?

I mean a lot more than that, it’s not just involving different functions; we need wider cognitive and experiential diversity at all levels and near real-time decision support. It’s interesting to see attempts at consultation and mass involvement – such as participative budgeting – failing to realise that anything that explicit will be gamed.

We use mass real-time engagement at a level of abstraction to gain an understanding of what underlies surface responses (thinking slow not thinking fast) and also to find people who are thinking differently about new problems.  We seek to find the 17% who have seen something other people ignore (see the quote below).

A picture of a gorilla, 48 times larger than the average nodule, was inserted in the last case.

83% of radiologists did not see the gorilla.

The key is to separate situation assessment from policy formation—engagement needs to start there before you move onto policy formation. Ideation then needs to take place at a specific level where the decision maker is able to actually make a difference, rather than making statements about what other people should or might do. All of this is part of a broader complexity-based approach to strategy which handles the parts that more traditional techniques miss. One of the reasons organisations fail is that they get pattern entrained by past success so they don’t see emergent possibilities that break the mould.

You’ve also previously written about the need for leaders to “build personal integrity and trust with employees. Just as organisations are currently grappling with great uncertainty and rapid change, so are the individuals within them—with digital transformations calling job security into question. How can leaders practice integrity and build trust in this climate, particularly when their own organisational strategy may be causing unease among employees?

It’s all down to what you do, not what you say. Everyone is also forgetting that a lot of the jobs being hit by digitisation were an essential part of the apprentice models of learning that created current executives. Companies need to identify where human agency is needed and create systems with high levels of redundancy and longevity of employment to manage this—meaning smaller numbers but with security. Treating people as disposable assets means that, at best, they rent their knowledge to you rather than fully committing. Networks, or rather nodal networks, are also part of future organisational forms and few people are really thinking about that.

Finally, we’ve heard you’re a trekking fan—are there any trails in Australia you’re particularly keen to check out?

The whole of Tasmania—I am moving on from The Deep Dive to spend my 65th birthday there. In Sydney, I like the walk from Otford up to the ferry at Bundeena, although the new safety rails at the Wedding Cake rock are a disgrace and should be taken down.  I’ve done various walks in the Blue Mountains and I’m thinking of some longer walks there. But (sorry about that) there is better walking over the Tasman!

Before Dave heads off to trek in Tassie, be sure to come along and join him at The Deep Dive; held 26-27 March at The Prince Hotel, St Kilda. More info here: http://thedeepdive.com.au/