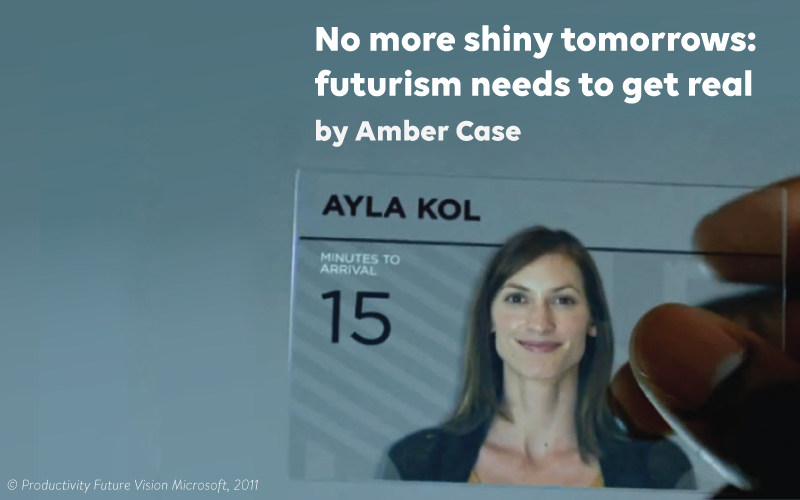 No more shiny tomorrows: futurism needs to get real

While these fantasies might seem benign, I believe their narratives are corroding the way we develop the future by distorting our perceptions of how we think the future will actually be implemented.

As alluded to in shiny future blog EmoTouchscreenFuture, most of these videos have something in common:

Colleagues in the futurism industry may protest that their clients won’t pay for videos where the future is imperfect, but I’d argue imperfection is mandatory — not just on principle, but for the basic fact that a more realistic conception of the future will benefit those clients, as well.

Whenever I see a video featuring a shiny future, I like to ask the following questions:

The Future is Mundane

We need to stop looking at what looks cool and focus on what works. And what works often looks boring.

Successful technologies dissolve into the everyday. They are convenient, like looking down and seeing an outlet next to your seat. It’s not advertised. It’s just there. Electricity is invisible. We toggle it with a light switch. The light switch is an extension of our fingertips. It’s there when we need it, and doesn’t call attention to itself when not. Compare this to Google Glass, or other intrusive technologies that call attention to themselves.

Middle Futurism: Bringing the Past to Life

What’s needed, I believe, is a new approach to forecasting the future that sits between the unsustainable techno-utopianism popular with Silicon Valley, and the dystopian imagery favored by pop culture. (Which is uninspiring, and only warns us what to avoid, not what to strive for.)

Ironically, a better way for thinking about our future comes from our relatively recent past. Much of the research at institutes like Xerox PARC in the 1980s that didn’t make it into today’s collective imagination. Bringing some of this back can help save us from building a future that is brittle, high cost, and impossible to maintain.
Call it middle futurism. It draws from the thought of PARC’s Mark Weiser, who wrote this in 1991:

The most profound technologies are those that disappear. They weave themselves into the fabric of everyday life until they are indistinguishable from it…Silicon-based information technology, in contrast, is far from having become part of the environment… The arcane aura that surrounds personal computers is not just a “user interface” problem… Such machines cannot truly make computing an integral, invisible part of the way people live their lives. Therefore we are trying to conceive a new way of thinking about computers in the world, one that takes into account the natural human environment and allows the computers themselves to vanish into the background.

Add “smartphones and smart devices” after “personal computers”, and we still face, nearly 30 years later, the same problem: Technology companies calling for computers to become more pervasive, more intrusive, but certainly not invisible — and futurists goading them along on this path.

Traditional futurists talk about disruption all of the time; middle futurism only advocates disruption that optimises our attention, involvement, and proximity to technology. Traditional futurists promote technology maximalism, perhaps best summarised by the motion-controlled UI depicted in Minority Report, which went on to inspire countless actual hardware products — even though it’s fundamentally impractical. Middle Futurism, by contrast, revives the PARC vision, describing a technological path that “takes into account the natural human environment”.

Regardless of what clients want to hear, it’s our responsibility as futurists to provide the full story, not just the good stuff. We need well-rounded futures that are filled with the acknowledgement that there are unintended consequences and suboptimal conditions. We should pay particular attention to how technological advances will likely exclude some people — and advocate solutions to make them more inclusive. Ethical futures work for all, not just a select few; they respect our precious, finite resource of time and attention, and help people flourish as fully realised humans.

So rather than blindly assume technology will somehow alter human nature for the better, middle futurism operates along these principles:

From a design perspective, middle futurism researches the past for clues on how to make maintainable products at human scale — buildable and serviceable, where technology integrates with culture as it exists, rather than expecting culture to change.

Design for the least amount of attention

My book, Designing with Sound, is a middle futurist approach to technology, showing how modifications to a single, subtle element of the human experience can completely modify our experience with a product or service.

Sound design can calm nerves and improve experiences. For instance, the noises associated with hospitals are jarring and upsetting (piercing alarms and beeps, grinding MRI scanners), but audio can diminish these signals with white noise, masking, and music.

Acknowledging the discomfort, boredom, and stress of flying, Virgin Airlines uses sound design during the check-in and boarding experience to soothe passengers.
I’m looking forward to working on long-term, sustainable futures, and I hope you’ll meet me in the middle.

Amber Case is keynoting and leading a workshop in Melbourne in June 2020 on the topic of Calm Technology, as part of AgileAus20. You can find out more at agileaustralia.com.au/2020/