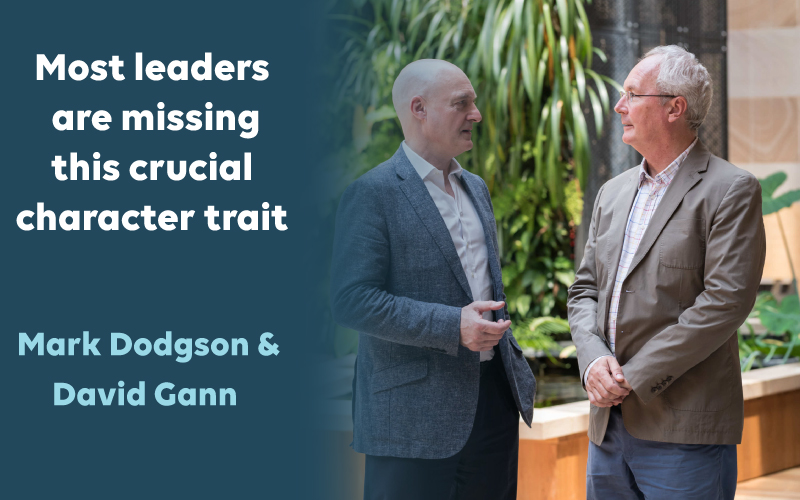 Most leaders are missing this crucial character trait

Mark Dodgson is the Professor of Innovation Studies at the University of Queensland. David Gann is the Vice President at Imperial College London. Together, they co-authored The Playful Entrepreneur (Yale University Press, 2018).

Mark will explore the importance of play in creating exciting and purposeful work in his keynote address at AgileAus19 (25-26 June, Hilton Sydney). More info here »

Many of the world’s most famous entrepreneurs are not known for their grace. Our culture associates a certain type of ‘robust’ personality with business success: whether it’s the catchphrases of TV shows like The Apprentice (“you’re fired”), Dragon’s Den (“I’m out”) and Mad Money (“bulls make money; bears make money; hogs get slaughtered”); or the titles of business biographies (The Titan, The Patriarch, Make Trouble, The Power Broker); the role of grace in business leadership is treated as a lower order trait.

Yet grace is a crucial ingredient of leadership today. Grace is the understanding that leaders don’t achieve great things on their own; they need others to work with, who they trust and respect. Leaders build empathy and loyalty with their colleagues, stakeholders, customers and audiences, through personal generosity and warmth. Graceful leaders lack hubris, recognise their shortcomings and are quick to give credit to others.

Hubris – believing your own PR – is found in all fields. Jonas Salk failed to give appropriate credit to his team for the discovery of the polio vaccine. The list of disgraced business leaders, brought down by a belief in their unfailing omniscience, continues to grow. Hubris is present in many of today’s political leaders.

But as we found in our book, The Playful Entrepreneur, there are also leaders capable of displaying great amounts of grace. In today’s business environment, where collaboration across professions and organisations is crucial, and where creativity and intuition are important resources to be nurtured, there is significant value in leaders who are graceful.

We found female leaders more easily recognise that competition is not always a zero-sum game. Several women we spoke to were dismissive of the ‘nature is red in tooth and claw’ view of the world, and ridiculed a testosterone-driven approach to management.

Startups Founded or Cofounded by Women Garner Less in Investments but Generate More Revenue
Sources: MassChallenge; BGC analysis
Note: Of the 350 companies included in the analysis, 258 were founded by men, and 92 were founded or cofounded by women.

Stephanie Shirley is a software pioneer who created a hugely successful company comprised initially entirely of women, fighting exceptional personal and business difficulties in so doing. As an indication of the challenges she faced, when she began her firm, women couldn’t open bank accounts without the permission of their husbands. Finding businesses did not reply to her under her name, she changed it with immediate effect to ‘Steve’. By wholeheartedly supporting and trusting her employees, she accumulated great wealth and, as one of the UK’s leading philanthropists, has dedicated her life and indefatigable energy to giving it away.

Grace is also found in the ambitions of two young Silicon Valley science entrepreneurs, Elizabeth Iorns and Jenna Tregarthen, who are strongly motivated by personal concerns in building their businesses. Iorns created a company that brokers the use of scientific equipment and she strongly believes in the need to provide career opportunities for young scientists.

Tregarthen formed a company that helps aid the recovery of thousands of young people suffering from eating disorders. Both have reason to be pleased with their achievements, but any acknowledgement of success is modestly attributed to others, and their focus lies in describing the continuing challenges ahead.

Being graceful does not imply any lack of ambition and personal fortitude. It is hard to imagine a more resolute and determined person than Carla del Ponte. When she was Switzerland’s Attorney General, and in the face of fierce opposition, she changed Swiss banking laws to prevent the laundering of criminal proceeds. In the process of doing so, the mafia murdered her close Italian colleague and counterpart and she received death threats.

Del Ponte then led the international tribunals prosecuting war crimes in Yugoslavia and Rwanda, facing direct opposition from those countries in which the crimes occurred, and indifference and occasional hostility from supposed supporters.

Yet amongst her achievements she succeeded in getting the first ever head of state to answer charges before an international tribunal. Her grace lies in serving the interests of justice, in the belief that when something is right, it gives you the strength of character to confront extraordinarily difficult circumstances.

Our studies also found numerous examples of graceful male leaders, displaying great empathy and generosity of spirit. They include, for example, Sir Ove Arup, the founder of the international design company, Arup; Gerard Fairtlough, who played a crucial role in establishing the UK biotechnology industry; and Lord Norman Fowler, the politician who has campaigned so determinedly to combat AIDS.

“In today’s business environment, where collaboration across professions and organisations is crucial, and where creativity and intuition are important resources to be nurtured, there is significant value in leaders who are graceful.”

The great American author, Marilynne Robinson, wrote in Lila: “Grace is not so poor a thing that it cannot present itself in any number of ways.” And the leaders we researched, male and female, displayed grace that was manifested in many different ways. For some, grace comes naturally, for others it needs to be cultivated, but it is an essential ingredient for leaders in a complex and uncertain world.

At a time when combativeness and vicious disagreements are poisoning our social fabric, there would be much value if all our leaders, and especially high-profile leaders in politics and business, displayed considerably more grace.

This article was originally published by the World Economic Forum on 14 February 2019.  View the original publication here »