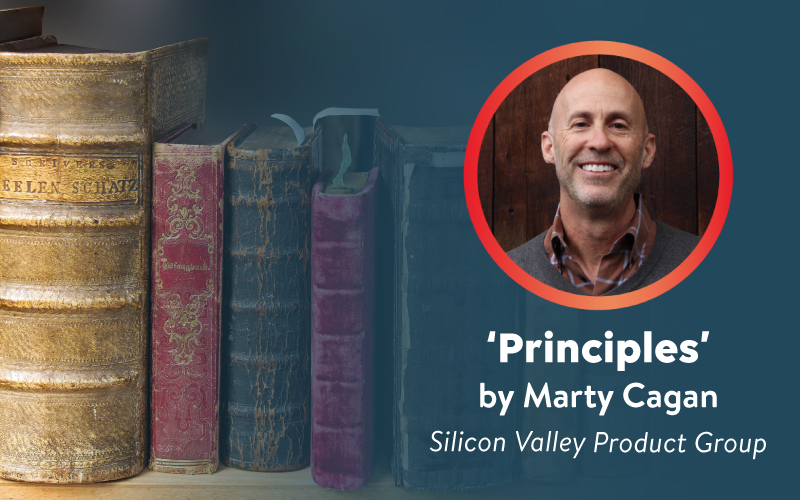 This post was originally published on the Silicon Valley Product Group blog in 2017. Marty Cagan will be speaking at AgileAus19 on 25-26 June at Hilton Sydney. Be sure to subscribe to AgileTODAY magazine to discover some more books that have inspired Marty.

If you’ve had a chance to read the new edition of INSPIRED, you hopefully noticed that in this version I decided to focus quite heavily on the principles underlying modern tech product management:

I want to be clear as to why you’ll see so many principles called out in this book. When I coach product managers, I always try my best to explain the underlying principles of why we need to work the way we do.

I find that when a person reaches the point that they have a solid understanding of the principles, they develop a good mental model for when each technique is useful and appropriate, and when it is not. Further, as new techniques emerge, they are able to quickly assess the potential value of the technique, and when and where it is best utilized.

I have found over the years that while the techniques change fairly constantly, the underlying principles endure. So, while it may be tempting to jump right to the techniques, I hope you will first consider the principles, and work to develop a deeper understanding of how to build great products.

The more I work with product teams and the more I learn, the more I’ve come to appreciate these underlying principles.

Which leads me to the purpose of this article.

Recently I read Ray Dalio’s new book, Principles: Life and Work. To cut to the chase, I consider this the most important business book of 2017, and I’ve been encouraging the teams I work with to read and seriously consider the principles in his book.

First, I have never met Ray Dalio, nor have I ever even visited his company Bridgewater Associates. While Bridgewater is most definitely a technology-powered enterprise, they manage hedge funds for their clients so it’s not the typical tech company where I usually spend my time.

I had occasionally heard of Bridgewater because they have been conducting a large scale experiment on company culture based on radical transparency and meritocracy that’s been the subject of speculation for a long time.

Second, I had no idea this book was coming out or what it would be about, so the common focus on principles is entirely coincidental.

Ray’s book is really about three things: first, there’s an autobiography of Ray including the origin story of Bridgewater; second, there’s a detailed discussion of the company culture they have worked so hard to create at Bridgewater; and third, there’s a discussion of general life and work principles that Ray has found worked for him and for his company.

As a long-time student of company cultures, I found the description of the company culture truly fascinating, but I want to be clear up front that this is not actually why I am recommending the book.

I would love to someday visit Bridgewater and observe what it’s like first hand. I’d like to think that I would love to work in a culture like this, but it’s an extreme enough culture that I think it probably has to be experienced before you can really know what it’s like.
The culture is all about achieving a true meritocracy, something we all talk a lot about in tech, but most companies find is much easier said than done.

The foundation for meritocracy at Bridgewater is what Ray refers to as radical transparency as well as what some now refer to as radical candor (in Ray’s book and also in my own writing, we both use the term tough love for this).

As much as I love the idea of this sort of company culture, unfortunately I don’t actually believe it could be successfully deployed in the vast majority of tech companies I know.

I say that because it depends on a very specific cultural fit, especially at the senior leadership level, and a commitment to the principles that I think you’d have to have as the primary guiding force in all of your recruitment, hiring and promotions.

I think an early stage startup could successfully adopt this culture, if the co-founders were all-in, but converting to this culture for an existing company seems to me would be extremely hard unless you’re willing to turnover probably 50-80% of the employees and especially the managers.

I don’t mean this as a criticism of most companies. It’s just that this culture is so extreme that it requires a very specific cultural fit. If you read Ray’s book I’m pretty sure you’ll understand what I mean here.

All that said, while the radical transparency culture might not be for everyone, the majority of the work and life principles are in my view extremely applicable to most of us in technology.

As I read the book, I kept flashing back to managers in my career that took the time to share with me many of the lessons and principles that Ray shared. I know that I benefited tremendously from interactions including and especially criticism from leaders that I truly respected.

Ray makes the point repeatedly that you don’t need to subscribe to all of his principles. He’s just sharing the work and life principles that have worked for him; but I found that most of them were very consistent with lessons and principles I have learned, and that I have tried to share with others.

The gift of this book is that Ray took the time and effort to actually write out and explain his principles. It was clearly a herculean task.

It’s not so hard to spell the principles out for a specific domain like product management like I tried to do in my book, but Ray’s goal was to spell out the much larger and more fundamental set of principles, like how you should plan your career, or interact with the members of your team.

A sincere thank you to Ray Dalio for sharing his principles with the world. I am hoping other leaders such as Elon Musk and Jeff Bezos someday decide to share their principles as well.