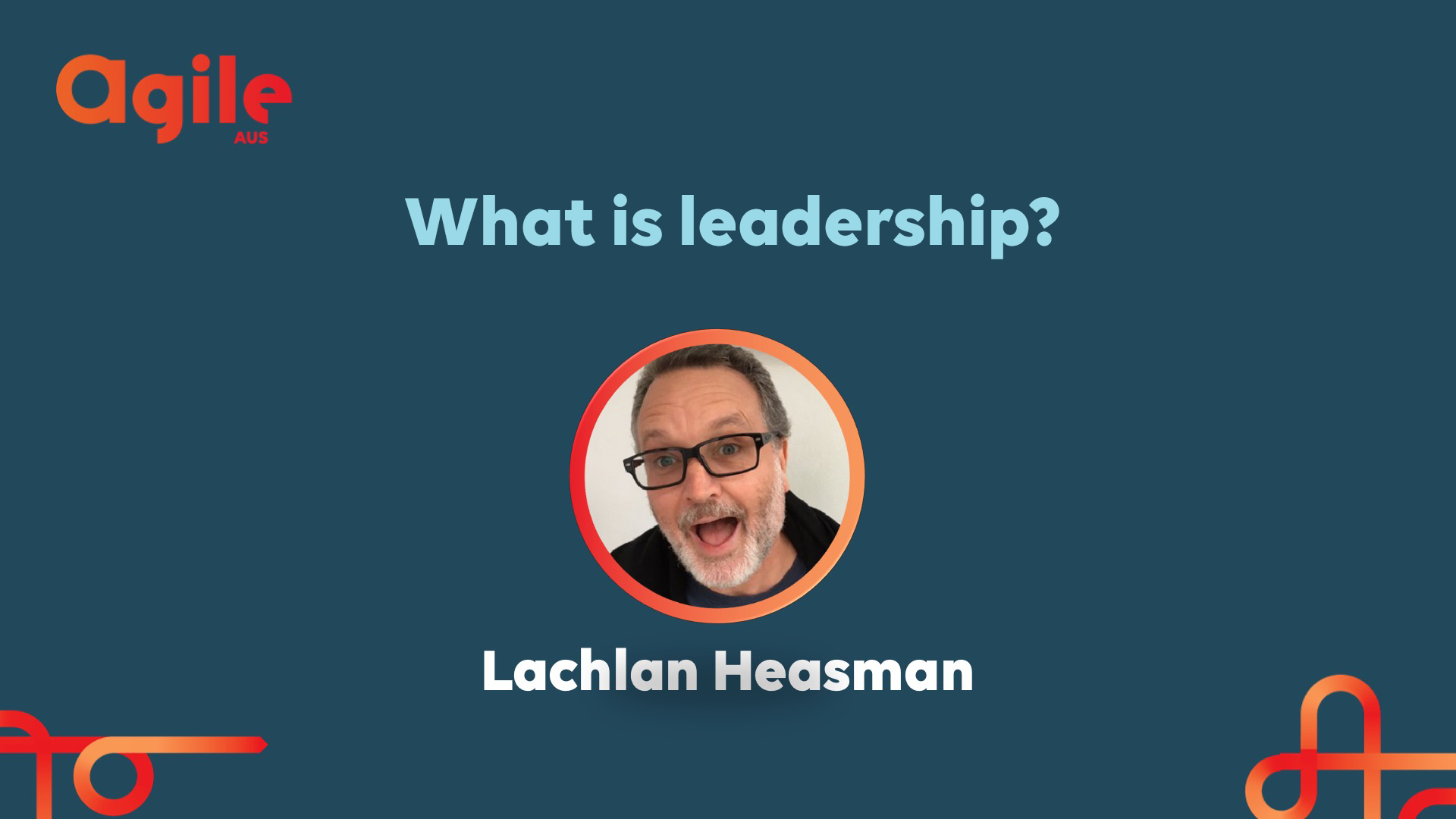 A guest blog series by Lachlan Heasman
I am going to be writing a bunch of posts about leadership. My plan for the posts is to provide some interesting and, perhaps, useful bits and pieces on leadership. For this post, I thought I should try to define what I am writing about. I want to do this so you know where I am coming from when I use the term “leadership” because it may be different from your understanding or experience (this is ok, but without being able to have a chat about what we think of the topic it’s a challenge to create shared understanding).

Depending on what someone is trying to say about leadership or their perspective or experience of leadership they will define leadership in a different way. Here are several ways people have defined this phenomenon, you can pick your favourite.

… to get others to do something because they think you want it done and because they know it is worthwhile doing. (D Eisenhower)

Leadership concerns the capacity to build and maintain a high-performing team. (Hogan)

… a process of motivating people to work together collaboratively to accomplish great things. (Vroom and Jago)

Those who instruct others about what to do are leaders. (Pietraszewski)

Leadership is the ability to inspire a team to achieve a certain goal. (Robbins)

And if you don’t like one of these you can grab one from a book, there are tens of thousands to choose from. Booktopia has a catalogue of 9500 and Amazon claims over 60000 titles. You could pick from “Stop Playing Safe” or “The Commando Way” (I think these books may be related and there is some connection between leadership and underwear choice). Or the more numerically inclined “5 Roles of Leadership” or the “14 Principles” from The Amazon Way, or “21 Irrefutable laws” for leadership. These authors want to use a particular frame of reference for leadership to support what they have to say and the sales of their book. Which might make you wonder about an objective definition of leadership.

The academic world is often a good place to go if you are looking for objectivity. If you are looking for a definition of leadership in this domain the ProQuest database has over 3500 peer-reviewed articles on leadership from 2020 alone. So there’s a lot to choose from there. Unfortunately in the research world (like the commercial world), there are many definitions of leadership and, according to the well-regarded leadership researcher Gary Yukl, a researcher will define leadership according to what they are interested in studying (sounds familiar, it’s not unlike an author framing the subject in a way to sell their book). For example, if you make the assumption that “leaders are born not made” then you will study the traits (a trait is a long term, non-changing, personal attribute such as personality) of people who are considered to be leaders, whereas if you start from the assumption that “leadership depends on the situation” you will look at the differences in specific situations that give rise to what people describe as leadership. The lack of a clear definition of leadership has led to some researchers asking whether leadership is something that can be studied scientifically. I don’t intend to let that get in my way. Even if I can’t find a handy definition of leadership I think I know leadership when I experience it.

In general, leadership seems to be about influencing others to do something. Inspiration or motivation may be the tools of leadership influence, and there are certainly others that can be used (such as coercion or power).

Leadership is an interpersonal action that has mostly been understood as one person leading several others and that the leader has an involvement in the results of the action. I think this last part is useful to consider because if leadership is solely about influence then it could be anything from sales to bribery (perhaps it is). Gary Yukl gives a comprehensive definition of leadership:

“Leadership is the process of influencing others to understand and agree about what needs to be done and how to do it, and the process of facilitating individual and collective efforts to accomplish shared objectives.”

This is a great general definition, it incorporates the interpersonal influence process and the need for the leader to be involved in the outcome of the leadership. It’s also quite academic. So I will stick with my basic one-liner:

“leadership is when someone in your team provides influence or guidance to your team that helps the team with its work”.

My brief definition should make you wonder what I am studying with respect to leadership. I am trying to understand how different people lead in a team, rather than a single “defined” leader. So I want to tap into someone’s personal experience of leadership as they understand not as I might try to define it.

Mary Uhl-Bien (one of the leadership scholars) and colleagues made an interesting distinction between Leadership and Leaders. They argue that organisations are complex (in a complexity science way, cynefin and such) and our ideas of leadership are outdated, stuck in the hierarchical structures of the past. In the new world of complexity, the idea that a leader can influence their organisation (or the people in the organisation) in a way that will achieve some kind of predetermined or desired outcome doesn’t make sense, it’s too deterministic. They suggest that leadership is an event that comes from interactions between people rather than leadership being something someone does. Leadership is something that emerges through interactions. When the interaction brings about an “adaptive outcome” we have leadership. They then separate leaders from leadership. Leaders are people who influence the dynamics and outcomes whereas leadership is the event that produces the outcomes.

I don’t think I am smart enough to get my head around everything they have to say on this idea of leadership but I agree with their points of moving beyond our hierarchical ideas of leadership. Doing this will take leadership from a position in a hierarchy to something else. For Ulh-Bien and colleagues leadership is an interaction or outcome of an interaction. For me, it’s a behaviour or the outcome of behaviour and how others interpret the behaviour or outcome. With either of these interpretations, we open up the availability of leadership to anyone, which might bring up a question about management and leadership.

You may work in a company that has a “Senior Leadership Team”, maybe several of these teams and perhaps an “Executive Leadership Team” for the C-level people. There was a time when these groups were called “Management Teams” (or just “Managers”) but that changed in the last 20 or so years. The members of these teams hold positions in the organisational structure that give them both some power to make decisions on how resources will be used and also the responsibility for the results of these decisions. This is a pretty basic definition of management. But now these groups are all “leaders”, so every action they take is “leadership”, it makes me wonder who is doing the managing.

The reality is this was simply a label change rather than a change in the role and that leadership is one thing managers need to do, however, this label change may reinforce the idea that being in charge and leadership is the same thing. A manager is required to administer some domain within the organisation, maybe it’s a project or department or something else, to do this effectively they will need to provide guidance to the people they work with and influence the people they work for, this is, essentially, leadership. When we imagine the management role is now just about leadership we may forget about managing, which has a much broader scope than leading and requires different organisational support and authority.

A consequence of this label change could be that activities that are “management” and “leadership” are now part of the organisational structure and someone will only provide leadership because that’s the title given to their place in the hierarchy. In the modern world, a complex world, this is a problem because leadership supports the adaptability that is required to respond to the ever more complex environment we are working in. If we limit leading to the few people within certain organisational ranks we are going to respond slowly to whatever is going on and this response is going to be with limited information.

What I hope you get from this rambling post that was trying to give a definition of leadership and ended up going on about management is that leadership can be tricky to define and perhaps a simple definition is useful.

Leadership is something that happens when there are multiple people together, there is some influence or guidance provided to this group of people, this influence makes “things” better for the group and the person who provided it is involved.

A simple definition taps into someone’s experience or understanding of leadership without trying to limit leadership to a specific set of behaviours or situations or traits. I will be using this definition of leadership in other posts to compare what others have to say about leadership.

I am conducting research on leadership and I’d love you to take part. I need data from teams to find out how leadership works. If you are interested click the link below. https://au.questionpro.com/t/ARnQ9ZRo5b

We’re looking forward to hearing from Lachlan Heasman at AgileAus21 (8-9 December 2021, Hilton Sydney) on the topic of Shared Leadership. You can find out more and register at https://agileaustralia.com.au/2021/